​”His intuitive, evocative playing is a key ingredient of the band’s magic” 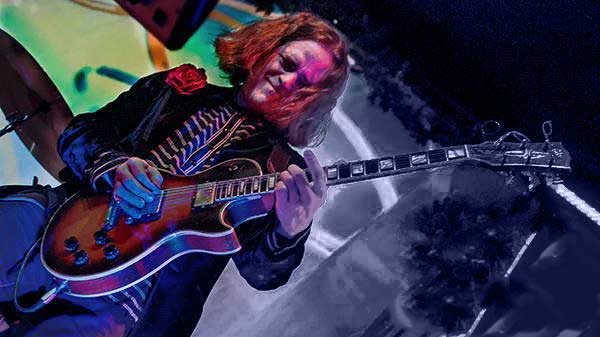 Sharkey McEwen is a world-class guitarist who has toured nationally and internationally for over 20 years with performances across the United States, Japan, Korea, China, Canada, England and Germany. With a soulful, evocative style tracing back to the spirit of Duane Allman, Carlos Santana and David Gilmour, yet with a signature sound of his own, Sharkey's emotive style has garnered him deep respect and admiration from peers and fans alike. Sharkey is most well known as the lead guitarist for The Slambovian Circus of Dreams, aka The Grand Slambovians, based in New York State...

Recording and touring with The Slambovians since 1998, McEwen has produced, mixed and mastered the band’s 5 critically acclaimed studio and numerous live albums, and has performed with The Slambovian Circus of Dreams in coffeehouses and theaters as well as major music festivals including Hardly Strictly Bluegrass in Golden Gate Park, CA, Mariposa Music Festival in Ontario Canada and the UK’s legendary Glastonbury Music Festival. Along with his talents on electric and acoustic guitars and mandolin, including slide work, Sharkey is a gifted vocalist and bass player. His other talents include Composition, Arranging, Band Leading and Audio Engineering.

Sharkey has recorded on and produced numerous studio albums with various artists over the years. In California he was founding member of The Boy Next Door who played the LA circuit. In NYC he performed and co-produced the album “Love Songs for Astronauts” with The Pat McGuire Band who appeared on NBC, Late Night with Conan O’Brien. He also appeared on Norwegian artist Torhild Nigar’s album for Polydor, “Stille Vann” as a session guitarist. Sharkey has also enjoyed success as a jingle writer/producer, creating the soundtracks for commercials by Mattel and others. He was also the band leader for a production of “Aesop’s Fables” hosted by Circle In The Square Theater, in NYC. Sharkey currently resides with his family in the Hudson Highlands of New York. He enjoys performing as a guitarist and singer, song-writing, recording, engineering, producing, teaching guitar and more. To contact Sharkey click here.

THE GIFT OF MY DIGITAL MUSIC FOR YOU.

A Box Of Everything